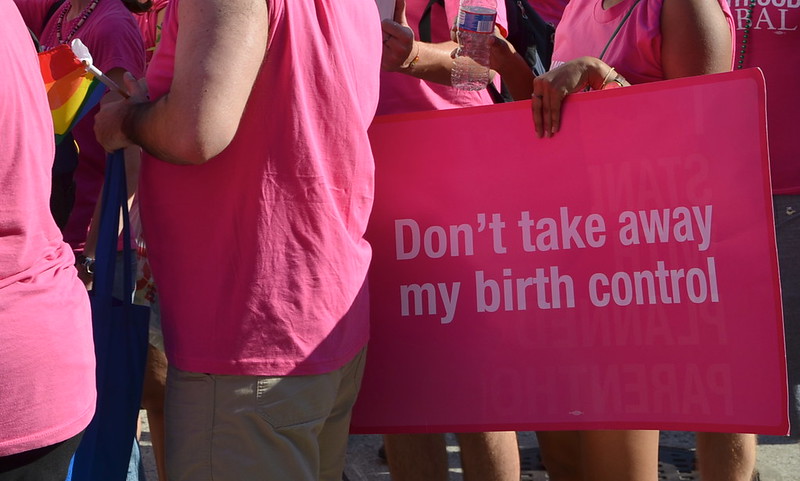 What the Christian Right Gets Wrong About Birth Control

A religious minority is being emboldened by the current conservative composition of the Supreme Court to fight a frontline battle not just against abortion – but contraception as well.

In a complaint earlier this year with the US Commission on Equal Opportunities, Robyn Strader, a nurse working at CVS, claimed she was fired on religious grounds for refusing to offer birth control. “I’m a Christian and a longtime member of a Baptist church,” she said. “I believe that all human life is created in God’s image and should be protected. For this reason, I cannot participate in facilitating an abortion or participate in facilitating the use of contraceptives that may prevent embryo implantation, cause abortion, or contribute to infertility.”

The Supreme Court has also used the principle of religious freedom to exempt employers from providing birth control insurance coverage. First, the court ruled in favor of Hobby Lobby in a case against the Affordable Care Act’s contraceptive mandate, exempting this private family business from birth control coverage. A recent Supreme Court ruling extended the exceptions to public companies, private institutions, nonprofits, universities and other types of employers that claim to be religiously or, as the Trump administration added the term, “morally” opposed to birth control .

In the Hobby Lobby case, the religious lobby articulated their belief, similar to Strader’s, that life begins at conception, the moment a sperm fertilizes an egg to produce an embryo, and they define an “abortion” to include the failure of an embryo to implant in the uterus after fertilization. They then falsely argue that some birth control methods, including IUDs, work by preventing embryos from implanting in the uterus, causing what they call “abortions.”

I will call them embryo abortions, as opposed to the medical term for abortion, which means the loss of a pregnancy after an embryo attaches to the uterus. The medical establishment considers a person pregnant only after the successful attachment of an embryo to the uterus, because only then can we measure the pregnancy hormone HCG and thus diagnose or confirm pregnancy.

Strader and Hobby Lobby are part of a vocal minority on the religious right who claim that the use of some birth control methods is immoral and strategically confuse the use of birth control with an abortion. This contrasts with 92 percent of Americans who consider using birth control to be morally acceptable behavior, according to a recent Gallup poll.

This religious minority is emboldened by the current conservative composition of the Supreme Court, which is waging a frontline battle not just against abortion — but contraception, too. Recently, Senator Paul Wieland (R-Mo.) introduced an amendment to a Missouri bill barring the use of public funds for drugs or devices that would “cause destruction of a fertilized egg or prevent implantation.” Wieland said, “If an FDA-approved device kills a human life, that’s an abortion.” Although these lawmakers aim to limit abortions, their actions have an effect opposite to their intent: increased abortions.

The scientific fact not addressed or known by the religious right is that embryo abortions are much more common when no contraceptive method is used. Researchers have estimated that 30 percent of the embryos created never implant when a couple does not use contraception (the standard when contraception is less accessible), and another 30 percent implant briefly before being expelled from the body without the Woman noticed it at all, resulting in a majority formed by embryos. In other words, the default state is sex without contraception embryo abortions— or what the right sees as a major loss in potential life.

Anyone who has religious beliefs about embryos worthy of protection should actively promote the use of contraception in general, and IUDs in particular, to prevent these embryo losses as much as possible. Birth control prevents the formation of embryos in the first place and thus failed implantation and embryo abortions.

Improving access to and use of effective contraceptives can reduce unwanted pregnancies and further decrease the number of abortions performed in the United States.

US Centers for Disease Control and Prevention

When it comes to IUDs, it’s important to note that all of the current scientific evidence is that they primarily work impede fertilization rather than disrupting embryo implantation. Since fertilization does not occur, the argument about “preventing implantation” of the embryo is moot. As researchers Ortiz and Croxatto wrote in a review article: “The bulk of the data indicates that the formation of embryos in the chronic presence of an IUD is much lower than in non-IUD users. The general assumption that the usual mechanism is … the destruction of embryos in utero is not supported by empirical evidence.”

Given this evidence alone – that fewer embryos are formed and subsequently lost in the presence of contraception – there would be a strong case for religious employers to support access to all contraception. Spirals do more than just prevent embryo abortionsthey also effectively prevent medically approved abortions. In a study by JF Peipert and colleagues, when free IUDs and implants became widespread in St. Louis, city abortion rates dropped to less than half the statewide rates. A family planning initiative in Colorado made long-acting birth control methods (IUDs and implants) affordable, leading to a 50 percent drop in teen births and abortions and saving the state $70 million.

As the CDC summarized in recent research, “Increased access to and use of effective contraceptives can reduce unwanted pregnancies and further decrease the number of abortions performed in the United States.”

The misinformation that contraceptive users “abort” more embryos than non-users – or that IUDs cause abortions – affects countless women trying to find the best methods of contraception to manage their health. These inaccurate beliefs underlie Strader’s refusal to offer birth control and motivate employers to make decisions that run counter to their values. This is a critical time to support access to birth control and prevent unwanted pregnancies as access to abortion is under threat.

With a better knowledge of the facts surrounding contraceptive methods, employers and other stakeholders can act with integrity and in accordance with their real values ​​- and women will be the beneficiaries of better access to health care, not less.

Sign and share MS.s relaunched petition “We had abortions”.— whether you have had an abortion yourself or simply show solidarity with those who have had abortions — to let the Supreme Court, Congress and the White House know: We will not give up the right to a safe, legal and accessible abortion.

Black women are still dying from childbirth in 2022. Why? Guardian of Los Angeles | Los Angeles Sentinels