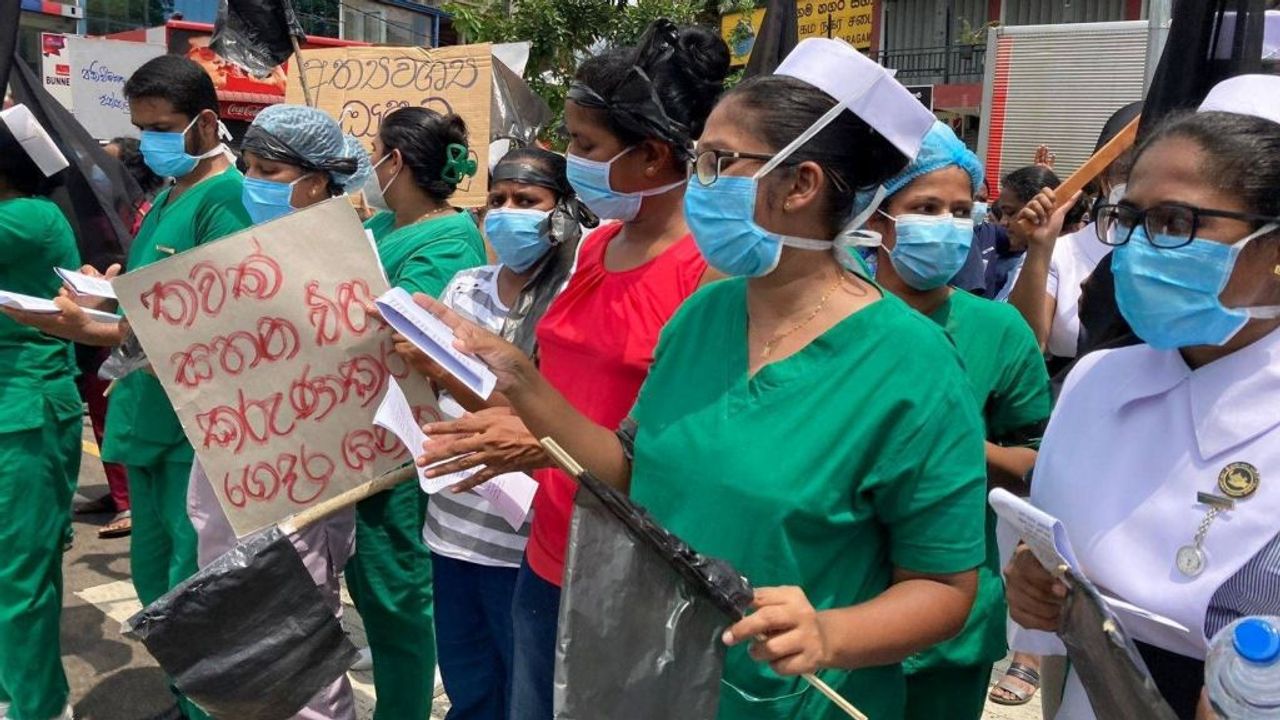 UK: Immigrant nurses speak out against the appalling conditions faced by patients in Sri Lanka

Workers and farmers in Sri Lanka are being pushed into hardship, hunger and social degradation as a result of the dire economic, social and political conditions created by the government of Gotabaya Rajapaksa and its predecessors over the past 74 years.

The COVID-19 pandemic and the US-NATO-led proxy war against Russia in Ukraine have exacerbated the crisis. Opposition to the ruling establishment has taken on an insurgent character in recent months.

The working class and the masses face a desperate struggle every day for fuel, cooking gas and other necessities of life. One of the catastrophic problems is the shortage of medicines and medical equipment, as the government cannot afford to pay for them as foreign revenue dries up. Some hospitals have run out of the most basic life-saving medicines. Many pathology laboratories suffer from a shortage of the chemicals needed to perform patient testing.

According to the Ministry of Health, there is a shortage of 14 essential medicines and 185 other types of medicines nationwide.

Earlier this month it was reported that Dinuth Devanath, a 16-year-old boy from Anuradhapira, died after being bitten by a viper as the antivenom was not available at Anuradhapura General Hospital.

The WSWS spoke to two nurses who recently emigrated to the UK. They spoke about the lack of medicines and equipment in Sri Lanka and the terrible consequences for the patients.

VishakaA nurse who worked for 14 years at Lady Ridgeway Hospital (LRH), the main children’s hospital in Sri Lanka, said: “The economic crisis in Sri Lanka has created enormous problems in terms of the lack of vital medical equipment and medicines for vulnerable children.

“Intravenous levetiracetam injections were among a lot of things that we didn’t have in our department. This is an important drug to prevent continuous seizures in children. When it wasn’t available, we managed to get something through the local purchase system for a while. Then we couldn’t find it at all. We only had an oral form of this drug. But they take much longer to react and children suffer. The consequences can be serious.

“You won’t be able to imagine it, but many parents cannot afford to buy Pampers for their children. They are very expensive anyway. So we had to make our own makeshift pampers out of cotton and gauze. This had to be done in addition to our other nursing work. Even cotton was scarce when I left.

“Bottlenecks were not limited to our unit. The surgical operating units also struggled with a lack of medicines and the necessary equipment. I heard from colleagues who worked in the cardio-thoracic intensive care unit that they didn’t have a number of important items. There have been cases where there were no stents and artificial valves to treat heart disease.”

“During the recent anti-government protests, we demanded that they immediately provide the necessary equipment and medicines. Without these vital medicines, we cannot treat children properly. Many children who come to LRH come from very poor backgrounds. They cannot afford to bring medication from outside pharmacies. There used to be some funding for this, but it has dried up.

“We had a cash register on every ward for people who couldn’t afford to buy medicines from external pharmacies.”

The Rajapaksa government, like its counterparts around the world, has been callously indifferent to the lives of working people during the COVID-19 pandemic.

Vishaka commented: “During the first wave of the pandemic we did not have the necessary personal protective equipment [PPE]. So we used garbage bags to make aprons. At the beginning we sewed our own mask out of clothes. Later we received PPE mainly as donations. Since ours is the main children’s hospital, many children with COVID and its complications have been transferred from all over the country. Patients and staff have faced unimaginable difficulties during this time.”

malintha is a registered nurse with 11 years of experience. Before migrating to the UK, she worked for a year at the Divisional Hospital in Kithulgala, which was being used as a treatment center for COVID patients.

She previously worked in the Surgical Intensive Care Unit at the National Hospital of Sri Lanka (NHSL). Kithulgala Divisional Hospital is a very small treatment center located more than 75 kilometers from Colombo. It has an Emergency Treatment Unit (ETU), an Outpatient Clinic (OPD) and three wards.

Malintha described the frightening situation during the pandemic and the current situation with severe bottlenecks. At the peak of the pandemic in August last year, they had around 200 patients with COVID at this small rural hospital. To care for these patients, they had only 10 nurses, six doctors and a few assistants. At one point, six nurses, including Malintha, contracted COVID. The remaining four nurses had to stay in the hospital day and night with short breaks to check patients’ vital signs and medications. Patients whose condition worsened were taken to the nearby Karawanella Base Hospital (KBH).

Malintha said: “Unfortunately we were only able to do what was absolutely necessary for the patients. When they were seen by the doctors, we gave them all the medicines marked for 10 days. Then we only went to the wards in emergencies to check and document vital signs. Some patients collapsed internally due to diabetes, dehydration and other diseases. Then we had to wear PPE and go inside to start IV fluids and other treatments. The rest of the time the patients had to take care of themselves.

“Fortunately, the patients we had were not as symptomatic. But one of the main problems was that we didn’t have enough oxygen tanks. There have been cases where we have had to administer oxygen to patients who are hypoxic or short of breath. We only had one or two cylinders in the hospital. We have been instructed to transfer patients who require oxygen therapy. Sometimes transfer was not an option because there were no beds in the base hospital.

“One day a patient came to the ETU. We did a quick antigen test and it was positive. Then he was brought to the ward in a wheelchair. Before he was put on the bed, he collapsed and fell. We had to go in without PPE. Another day, a patient had seizures, so all we had to do was rush in wearing only masks and gloves. We had to suction his secretions to avoid aspiration. The suction set did not work. We borrowed one from another station and it didn’t work either. This was among the biggest problems we faced during this period.

“We have had no deaths in our hospital because we transferred patients to KBH when their condition worsened. Unfortunately, we heard from our colleagues that some of the patients we transferred to KBH died.”

About the current situation, Malintha said: “We have about 500 patients who come here for treatment, but for the wards we only get two rolls of elastic plaster per week. They are highly unsuitable for applying pressure bandages to some wounds. Since we don’t have proper IV cannula bandages, we need to use them to secure the cannulas as well.

“We didn’t have enough normal saline and other IV fluids. We were forced to use the same saline bottle to perform nebulization for months in ETU, OPD and wards. When I worked in intensive care [Surgical Intensive Care Unit] of the NHSL we changed it every day. We received about five bottles of saline for the OPD, but they weren’t enough at all. We use them to clean wounds, dilute medicines, and irrigate ears. How can you do all of this with five bottles of saline a week?

“One of the biggest problems we have is the unavailability of the ARV rabies vaccine. We have at least three to four patients bitten by a dog, monkey, cat or squirrel every day. You should have the ARV. If it’s a major bite, we send her to the KBH to get the anti-rabies serum. Serum injection is a very expensive treatment and should be performed in a facility with intensive care units. Patients are not receiving these critical treatments now.

“We have no family care equipment and no medicine. We do not have Depo Provera [a contraceptive injection that contains the hormone progestin]Loop contraceptive or Jadelle [a reversable long-acting contraceptive implant]. Before I left this month we only had oral contraceptives (OCP). Some people who can afford it buy Depo-Provera from outside and get injected at our hospital. Many people don’t have money for their other necessities of life. Some people living in very remote hilly areas come here by renting tricycles [a small taxi]. If they come here they will not be treated.

“We lacked antibiotics. I remember once we only had Flagyl [Metronidazole] in our hospital. We didn’t have oral Augmentin [Co-Amoxiclav]. These can have serious consequences for patients. Sometimes we had to transfer patients to KBH because we didn’t have basic antibiotics to treat diseases.

“Some patients do not want to be discharged because they have nothing to eat at home. Some try desperately to exaggerate their condition or pretend to collapse when released to extend their hospital stay. At least they get something to eat in the hospital.”

42% of workers run out of cash before payday – Earnipay