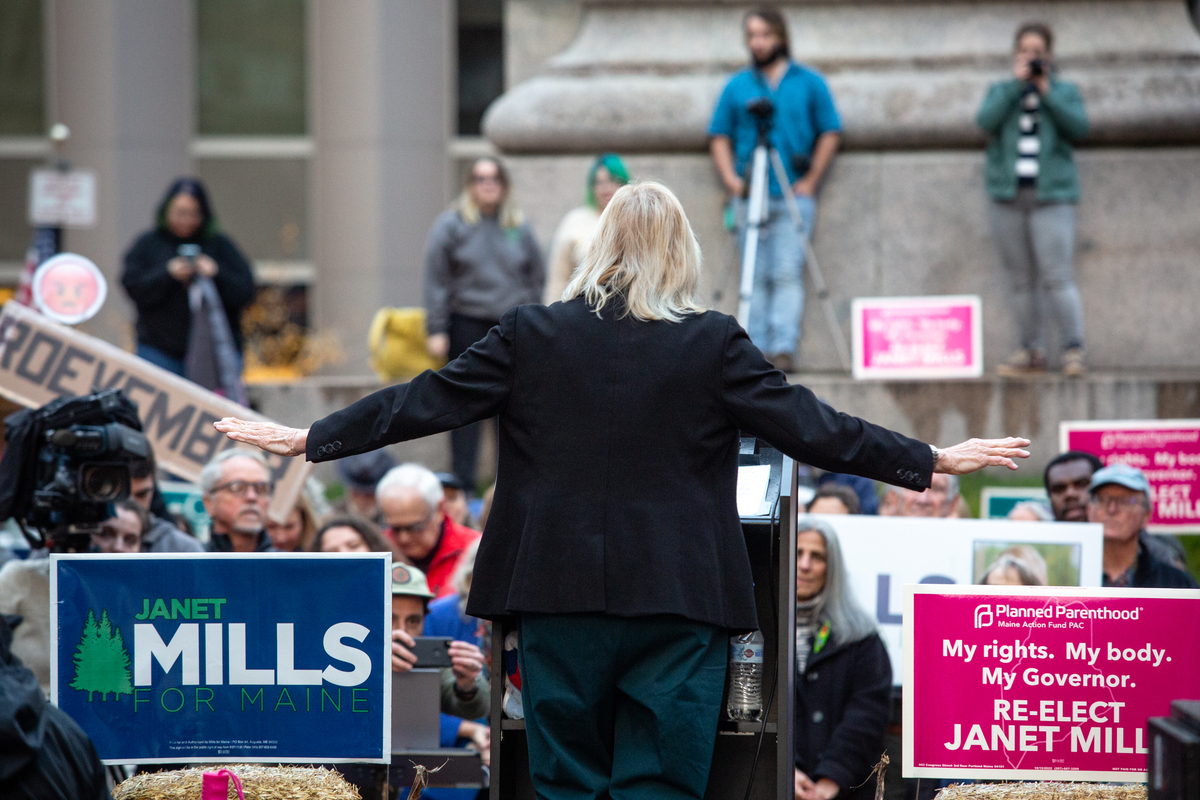 PORTLAND, Maine — After Republicans rallied less than two miles away to portray Gov. Janet Mills as untouched by rising costs and inflation Tuesday, she led a pro-choice rally in Monument Square.

“The decision about reproductive health rests with a woman and her doctor,” Mills said. “Not a politician and certainly not Paul LePage.”

The event was one of several attempts by Mills and the Democratic Party to frame this year’s election as an abortion rights referendum, less than five months after a conservative majority in the Supreme Court revoked a constitutional abortion right.

It was fitting that the final week of the campaign between the Democratic governor and LePage, her Republican predecessor, began with a headline war on the two issues that have dominated the 2022 campaign both here and across the country.

Republican hopes were high in the spring, as gas prices soared in the wake of Russia’s invasion of Ukraine and President Joe Biden saw rock-bottom approval ratings ahead of a midterm election that looked bleak for his Democrats. But they gained momentum over the summer after the US Supreme Court overturned state abortion rights.

It boils down to an election in November that appears to be somewhere in the middle of these poles. Republicans have been gaining ground in national polls since late September, though Mills has looked durable in Mainers polls and remains the favorite for Election Day.

LePage’s campaign has linked Mills to the global and national problems that are causing high costs and inflation, particularly heating oil. She has hit back, citing the $850 aid checks given to most Mainers this year and saying the anti-abortion LePage would threaten abortion rights. He has denied this on the stump, even saying he would veto a 15-week ban.

This week, Republicans echoed comments Mills made on Sunday during a stopover at Bates College in Lewiston, comparing inflation to a “distraction.” A spokeswoman for the governor said she also took note of political reactions to the expense, arguing that Republicans had not proposed any real solutions.

Economic issues and abortion have hit voters differently. High costs and inflation are routinely cited as the biggest issues of 2022, however A September poll by a liberal group found that 40 percent of Mainers blamed federal officials the most and only 2.6 percent blamed state officials. Abortion was a secondary issue overwhelmingly motivating Democrats.

Those differences were easy to see when speaking to voters in the Portland suburb of Windham on Tuesday. Among the most politically divided communities in the region, 2020 voters backed Biden by 4 percentage points after backing Republican Shawn Moody by 6 percentage points over Mills in 2018.

Democrats there understood concerns about inflation but were skeptical that Mills or even federal officials could do anything about it. Bill Briggs, 68, of Windham, a former teacher, said people were clearly suffering but thought the rhetoric was designed only to hit Democrats.

“The inflation issue is, I think, a Republican red herring,” he said.

His wife Martha, a 63-year-old former preschool teacher, noted the consensus view of Supreme Court Justice Clarence Thomas on the abortion case in which he argued that other rights deemed constitutional by the court, including same-sex marriage, should also be overturned.

“The issue of abortion is a symbol of what could come next,” she said. “What other rights could be taken away?”

Wendy Downing, 49, who owns a hair salon, said she usually votes Republican. She plans to go for the Republicans this time, with the economy as a priority. But her views on abortion were complex. She believes women should have the right to vote, but said she disagreed with it being used as a form of birth control.

Asked if she worries about Republicans’ ability to attract swing voters due to abortion issues, Kouzounas reiterated that paperback issues like inflation are most people’s top concern, alluding to her party’s final campaign strategy.

“I think we should talk about inflation and heating bills — which affects most people in the state of Maine,” she said. “No other problems.”

A Stanford Voter’s Guide to the Midterms in California