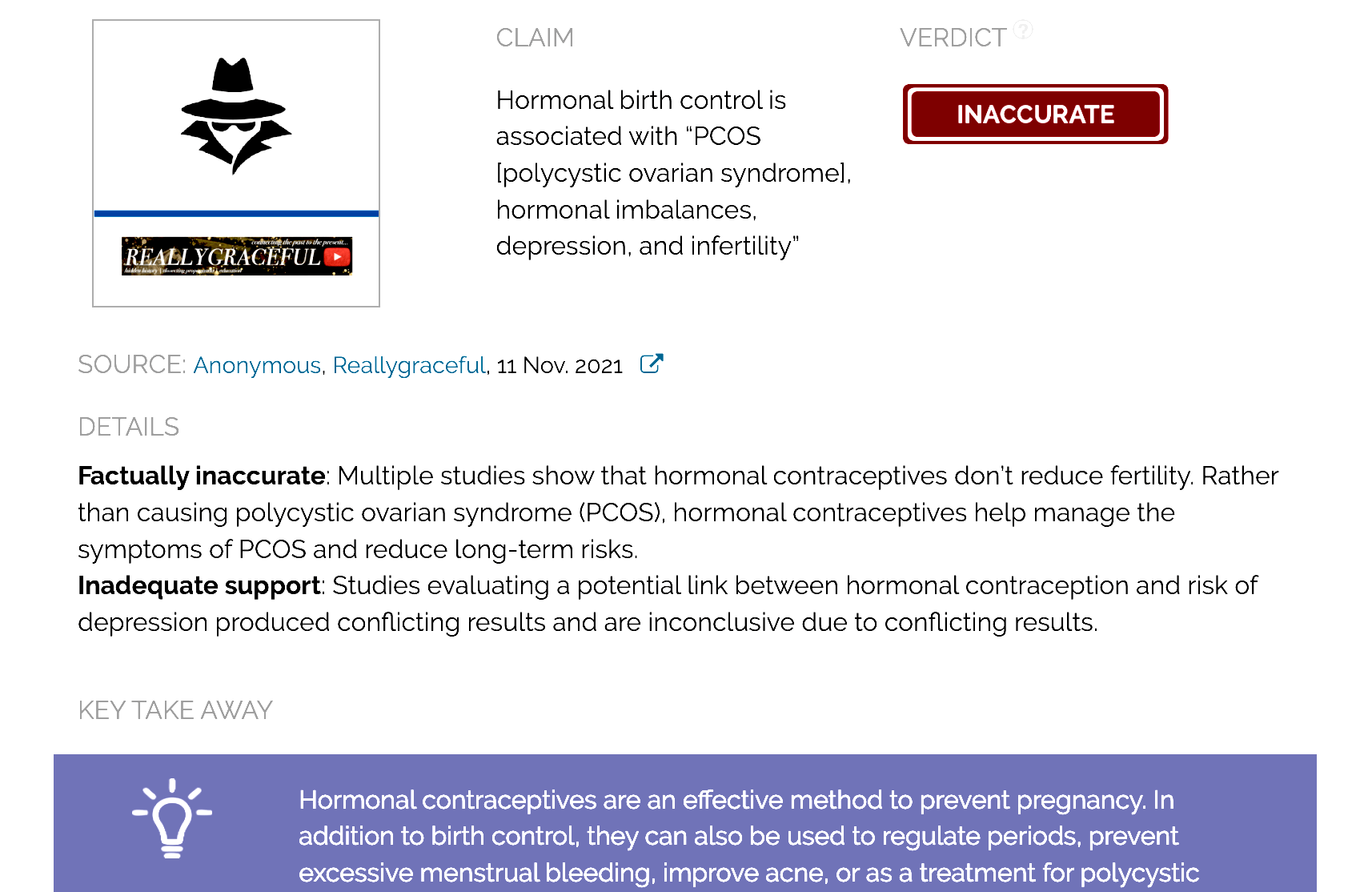 TAKE THE KEY WITH YOU

Hormonal contraceptives are an effective way to prevent pregnancy. In addition to contraception, they can also be used to regulate periods, prevent excessive menstrual bleeding, improve acne or treat polycystic ovary syndrome (PCOS). Contrary to claims on social media, such contraceptives have not been linked to harmful effects on women.

FULL CLAIM: “An entire generation of women was prescribed birth control for acne and irregular periods from the age of 14, and now that same generation is dealing with PCOS [polycystic ovarian syndrome]hormonal imbalances, depression and infertility”

Birth control (contraception) refers to any method, drug, or device used to prevent pregnancy. Common methods include permanent male and female sterilization, barrier methods that block sperm, such as condoms and diaphragms, and hormonal methods.

All hormonal birth control pills contain a synthetic form of the female hormone progesterone, alone or in combination with another female hormone called estrogen. These hormones prevent pregnancy by inhibiting the release of an egg (ovulation), thickening the mucus around the cervix to prevent sperm from entering and fertilizing the egg, and/or thinning the lining of the uterine wall to prevent a fertilized one to prevent ovum from attaching to it.

However, hormonal contraceptives also have other uses unrelated to birth control. For example, they can help control irregular periods, excessive menstrual bleeding, and acne. They can also relieve premenstrual syndrome, a combination of physical and emotional symptoms of varying intensity that most women experience a week or two before their period and, in some cases, can be temporarily debilitating.

In April 2022, a Facebook post suggesting that these non-contraceptive uses have harmful effects went viral on the platform, garnering more than 86,000 shares. The post reproduced a tweet from a video blogger known as Reallygraceful who specifically linked the use of hormonal contraceptives during adolescence to the development of polycystic ovary syndrome (PCOS), hormonal imbalances, depression and infertility later in life.

The tweet went viral in February 2022, prompting some gynecologists to refute the claims on social media, stating that birth control pills do not cause or contribute to PCOS or infertility. This was documented in a podcast (timestamp 5:31) that Reallygraceful released on their YouTube channel, which has amassed over 360,000 subscribers and allegedly provides evidence to support their claims.

However, the podcast didn’t cite any scientific studies, instead collecting anecdotal accounts from some women, including Reallygraceful herself, about the supposedly harmful effects of birth control. Given that anecdotal evidence tends to be biased for a variety of reasons, such as B. the fallibility of human memory and confirmation bias, they are unreliable without systematically collected and analyzed scientific data to support.

A 2018 systematic review and analysis of 22 previous studies found no difference in fertility rates between women who stopped birth control after using intrauterine devices (IUDs) and women who used hormonal birth control pills, including implants, injections and pills had[2].

Another study published in the British Medical Journal in 2020 the ability to conceive in nearly 18,000 women from Denmark, Canada and the US after stopping hormonal birth control, IUDs and barrier or natural birth control methods between 2007 and 2019[3]. While the authors found that some hormonal birth control methods caused a slight delay in return to fertility compared to barrier and natural methods, conception rates at one year were similar among the different groups. The authors concluded that long-term use of these methods had “little or no lasting effect” on fertility.

PCOS is a hormonal disorder that affects the functioning of the female ovaries. Symptoms include irregular menstrual periods and abnormally high levels of male sex hormones (androgens), which are usually present in small amounts in women. Sometimes the ovaries also enlarge due to the accumulation of unreleased eggs in the form of multiple small, fluid-filled follicles.

According to the US Centers for Disease Control and Prevention (CDC), PCOS affects an estimated 6 to 12% of women of childbearing age in the USA and is one of the most common causes of female infertility. In addition, this condition also increases the risk of metabolic problems such as diabetes, as well as heart disease, blood clotting and stroke. PCOS has no cure, but diet and activity changes and medications help manage symptoms and prevent these long-term complications.

Although the exact cause of PCOS is unknown, several factors such as family history, higher androgen levels, and obesity are suspected. In a blog post, Jennifer Gunter explained that current epidemiological evidence does not suggest that hormonal contraceptives are among these factors. On the contrary, combined hormonal contraceptives are often part of long-term PCOS treatment for women who do not want to have children because they help regulate menstruation and lower androgen levels.

Like any medical procedure, hormonal contraceptives can cause side effects, most of them minor. Common side effects include nausea, headaches, breast tenderness, and spotting or bleeding between periods. Serious side effects, including high blood pressure, blood clots, heart attacks and strokes, have been reported but are very rare, Health Feedback explained in a previous review.

There is consistent evidence that hormonal birth control is also associated with a slightly higher risk of breast and cervical cancer. On the other hand, hormonal contraceptives reduce the overall cancer risk by providing significant protection against colon, ovarian and endometrial cancer[4,5]. Therefore, birth control pills could offer an important benefit for women with PCOS, who are at higher risk of endometrial cancer[6].

Overall, research evaluating the potential effect of hormonal contraceptives on the risk of depression has produced conflicting results. A recent review in the Journal of American Psychiatry in 2021 concluded that “clinical trials and randomized placebo-controlled trials in women with psychiatric disorders have generally reported similar or lower rates of mood symptoms in hormonal contraceptive users compared to non-users.”[8]. However, more research is needed to draw more definitive conclusions.

5 CA bills you should know about