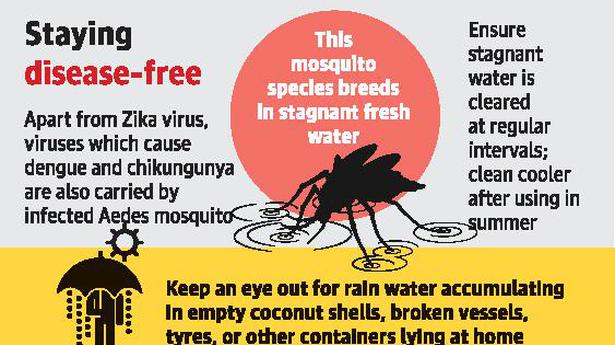 “Seasonal Disease Prevention Plan will take the sting off Zika”

Detection of at least 18 cases of the Zika virus in Kerala by Sunday evening has put other states on alert. Telangana hasn’t had a general warning yet, but officials said precautions to prevent vector-borne diseases like dengue and malaria would also help prevent Zika cases.

According to the World Health Organization (WHO), symptoms of Zika virus infection are generally mild and include fever, rash, conjunctivitis, headache, and muscle and joint pain. â€œSymptoms usually last two to seven days. Most people don’t develop symptoms. A Zika infection during pregnancy can lead to babies being born with microcephaly and other congenital malformations known as congenital Zika syndrome, â€according to the WHO.

Health officials here took a number of precautions before the onset of monsoons to keep vector-borne diseases at bay. They were tasked with identifying high risk areas where the incidence of the disease was higher in the past year.

Some of the preventive measures include releasing Gambusia fish to stagnant water, spraying residue indoors, and asking people to make sure the water is not in empty or broken containers, tires, coconut shells, empty shampoo bottles, or other containers lying around stagnates.

In addition to the Zika virus, dengue and chikungunya are transmitted by infected Aedes mosquitoes. This species breeds in stagnant fresh water. Since it is the rainy season, rainwater can collect in small or large empty containers that are lying around the home. Also, many people forget or skip cleaning the water from coolers after the summer, but this could become a potential breeding ground for the mosquitoes.

Greater Hyderabad Municipal Corporation’s chief entomologist, A. Rambabu, said they started the “Sunday 10 am 10 Minutes” program, which encourages people to purify stagnant water in and around their homes.

On World Population Day 2021, here are 5 methods of birth control