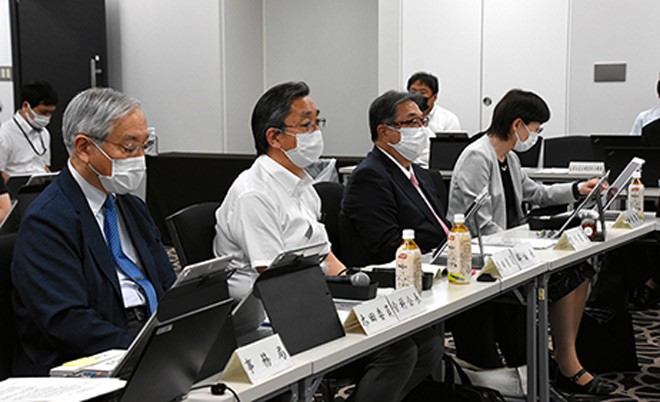 A panel of experts advising the Ministry of Health on measures to combat the novel coronavirus ruled on July 20 not to approve Shionogi & Co.’s COVID-19 oral pill under the ministry’s “urgent approval system” for the time being.

Instead, the panel will continue to evaluate the pill.

In the context of express approval, drugs are approved quickly for a limited period of time if, for example, an infectious disease spreads.

Most panel members agreed that the available data about the pill, collected in clinical trials, is insufficient to suggest its effectiveness.

They agreed that they should wait for the results of a larger clinical trial, which is in its final stages, to decide whether to approve the pill.

The pill’s name is Xocova and its generic name is Ensitrelvir.

It is believed to be effective in preventing the spread of the virus in humans and is intended for COVID-19 patients with mild or moderate symptoms.

Patients are advised to take one tablet daily for five days if the pill is approved.

Shionogi requested in late February that the ministry grant the drug “conditional early approval,” which would allow the drug to be used even if all clinical trials are not completed.

However, conditional early approval is intended for medicines for diseases with few patients, such as B. intractable diseases or rare forms of cancer, for which it is difficult to recruit participants for clinical trials.

The urgent authorization system was created in May when the revised Medicines and Medical Devices Act was passed in the state legislature.

Shionogi then changed tactics and applied for urgent approval of the pill.

This means that a drug can be approved even if not much data is available on its effectiveness.

However, the safety of medicines needs to be confirmed under the urgent authorization system as well as in existing systems.

However, Shionogi only submitted data from clinical trials involving around 400 people to the ministry in February.

Pharmaceutical companies typically submit data on clinical trials conducted on several thousand or tens of thousands of people when applying to the ministry for approval of more general medicines.

Additionally, Shionogi’s data did not reveal whether the pill was comprehensively effective in relieving 12 symptoms of COVID-19, such as fatigue or fever.

However, the data showed that the pill was effective in lowering levels of the novel coronavirus in patients.

Members of the panel’s subcommittee were divided over its effectiveness, postponing a decision at a meeting in June.

On July 20, members of the panel and subcommittee again discussed the pill together.

Topics discussed included the effectiveness of Xocova, its safety, whether there are other similar medicines and whether it is effective against the Omicron variant.

The experts present largely agreed that the effectiveness of Xocova is not clear, as data from participants in the clinical trials did not clearly show that it can relieve COVID-19 symptoms.

However, some members said it’s possible to speculate about its effectiveness because the clinical trials found the pill may reduce levels of the virus in participants, or shorten the length of time they show symptoms.

Other members said it would be helpful to have more treatments available for COVID-19 to prepare for the possibility of the virus spreading further or mutating.

However, others noted that the pill’s effectiveness in improving COVID-19 symptoms is unclear, even if the focus is only on the symptoms of Omicron patients.

Some members also pointed out that pregnant women cannot take the pill as animal studies and other sources have shown that it can cause birth defects in the foetus.

Also, it might be difficult for doctors to prescribe the pill, some said, because it would be dangerous to take it with other medicines.

The same applies to the oral COVID-19 pill made by Pfizer, which has already been approved for use in Japan.

After the discussion, many members agreed that they cannot “assume” the effectiveness of the pill.

Further discussion of the pill’s approval is not expected until November, when the results of the large clinical trial are published.

(This article was written by Kai Ichino and Kenji Tamura, Senior Staff Writers.)