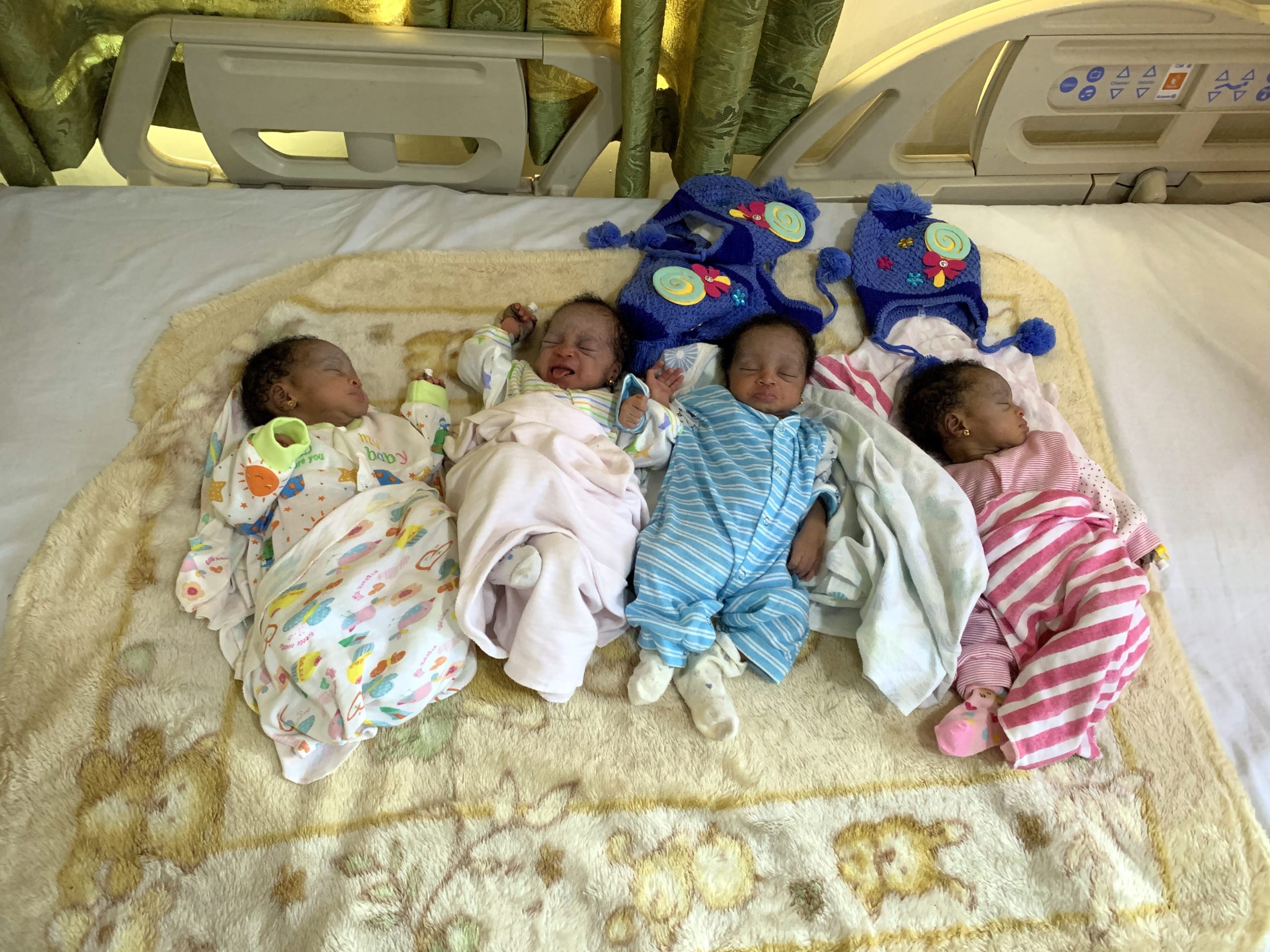 Seven years after the birth of her fourth child and the decision made together with her husband not to have children, the 37-year-old Muslim AbdulWaheed gave birth to quadruplets again.

The couple, who live in Gwako, a suburb of Gwagwalada in Abuja, federal capital territory, said they could barely support their family of six, hence the decision to stop the birth.

The husband, Ibrahim Abdulwaheed, a technician, said he doesn’t get work often in Gwako, a shy settlement in Nigeria’s capital, while the woman lost her grocery store to flooding in 2020.

An addition to the family will only worsen their precarious situation.

But for the first time the family could not afford the monthly contraceptive pills N500, the woman became pregnant and finally gave birth to quadruplets on November 11th, so that she had eight children to care for.

Ms. Abdulwaheed is one of 9.5 million of the 45 million women of childbearing age in Nigeria who want to avoid pregnancy but have not been able to due to various factors, including poverty.

This leads to an increasing rate of unwanted pregnancies, which can lead to unsafe abortions, which account for five to 13 percent of all maternal and unplanned births.

According to World Health Organization (WHO)Family planning enables individuals and couples to anticipate and achieve the desired number of children, as well as the intervals and timing of their births.

But for Musilimat Abdulwaheed, that choice only depends on how long she can afford the two.

One dollar! This is the cost of Ms. Abdulwaheed’s monthly contraception to protect herself from pregnancy. With several other competing bills, it was difficult to cough out that monthly bill.

The woman managed to take birth control pills for six years since the birth of their fourth baby, but the family’s continued decline.

The Abdulwaheeds lost their home and grocery store in a flood incident in Gwako Township in mid-2020.

“Between May and June 2020, a severe flood destroyed our house, my storage facilities and everything we had,” said Ms. Abdulwaheed.

“Then we sold the forest from the house that had already been destroyed and rented a one-room apartment for N24,000,” she said.

Ms. Abdulwaheed said the pills had become more difficult to buy and she eventually gave in to pressure in early 2021.

“At the beginning of this year there was no money for the pill and my husband and I couldn’t afford to stay away from each other,” said the 37-year-old.

The lack of funds to get contraception forced Mr. Abdulwaheed to adopt the withdrawal method.

The extraction method is sometimes called the “extraction method” or “coitus interruptus” and is a technique in which the penis is extracted from the vagina before ejaculation to prevent pregnancy.

This is not considered a very effective method of birth control because it comes with the risk of developing a sexually transmitted disease.

Also, many doctors advise that the method is very risky, especially if one is actively trying to avoid pregnancy.

They say this is because prior to male orgasm and ejaculation there is a small amount of pre-ejaculation sperm released that contains sperm.

“Even this small amount of sperm can still lead to pregnancy if you ovulate,” said a doctor.

Last week in March, Ms. Abdulwaheed said she noticed that her period had been weeks late.

Still unaware of her condition, she fell ill during the same period and was admitted to the local health center, where her pregnancy was confirmed.

That news was a mixed bag of gift and unexpected responsibility, said Mr Abdulwaheed.

Given their economic situation, the couple decided to terminate the pregnancy.

â€œEarlier this year, the woman was brought to my home unconscious and a laboratory test confirmed that she was pregnant. Although she insisted on canceling it, I refused because it was against my religion, â€said Aminat Babalola, a community health practitioner.

Ms. Babalola said, however, she decided to agree to the woman’s request and attempted the abortion.

â€œI told her I was going to have the abortion because I was afraid she would do it elsewhere and probably endanger her life.

“I continued to treat her for her illness but told her to give me a month to complete the abortion process,” she said.

The story took a turn, however, when the woman noticed an increasing bulging of her belly and confronted the caregiver about not having terminated the pregnancy for her.

â€œShe was crying that she couldn’t look after another child. She said I should have told her I couldn’t abort the baby so she could go elsewhere. But at the time we didn’t know she was carrying quadruplets, â€said Ms. Babalola.

At that point, the N24,000 Mr. Abdulwaheed paid for her one bedroom apartment had expired and the family had been thrown out of the house, rendering them homeless.

Ms. Babalola said the entire family of six eventually moved to their home to live.

She said a scan later revealed that Ms. Abdulwaheed was carrying four fetuses. “At that point, she was devastated and her blood pressure shot over 200. She cried every day after discovering that she was going to have quadruplets,” said Ms. Babalola.

“Even the treatment in the specialist hospital was a big problem for us because I did my best to help the family, but at some point I ran out of things,” she said, adding; â€œI’m glad we’re having the babies today and they’re all healthy. We appeal to Nigerians to support these babies in every possible way. “

Ms. Babalola said she asked for help from a pharmacist in Gwako, who introduced her to the chairman of El Hussain Specialty Hospital Dakwa, Dei-Dei, Hassan Zakari.

â€œI took her to my hospital after a friend called me for help. I have directed the CMD of this hospital to take care of them and provide the necessary medical care free of charge, â€said Mr. Zakari.

He said that since Ms. Abdulwaheed was brought to us about four months ago, she has received prenatal care and given birth to her babies with no bills.

The hospital’s chief medical director (CMD), Barau David, said, “We encouraged her not to terminate the pregnancy and promised to take responsibility for prenatal care through to delivery.”

“We looked after her up to week 34 and scheduled her for an elective caesarean section and the babies were successfully delivered.”

Mr. Zakari said the hospital could not take care of the family forever, so they would be released soon.

However, he said an appeal fund has been set up to help the mother and babies have a home to return to.

â€œWe did our best, but now we have to fire them soon. Unfortunately, the family doesn’t have to go. They can’t even pay for the N24,000 apartment they rented in Gwagwalada where they were kicked.

“We decided to set up an appeal fund so that the mother and babies have a home to return to, food to eat and clothes to wear,” said the doctor.

Ms. Abdulwaheed appeals to the public to support her family in looking after the newborn quadruplets.

â€œI can’t take care of her, my husband has no job, we are homeless, there is nothing to eat, so there is no point in bringing her into this world.

â€œI beg the public to come to our aid. We need help raising these babies that God has blessed us with, â€she said.

Details on the appeal fund

Support the journalism of the PREMIUM TIMES for integrity and credibility

Good journalism costs a lot of money. But only good journalism can ensure the possibility of a good society, accountable democracy and transparent government.

In order to continue to have free access to the best investigative journalism in the country, we ask that you give your humble support to this noble endeavor.

By contributing to PREMIUM TIMES, you are helping to maintain relevant journalism and ensure that it remains free and available to all.

The Effects of COVID-19 on Sexual and Reproductive Health: A Case Study from Six Countries – World