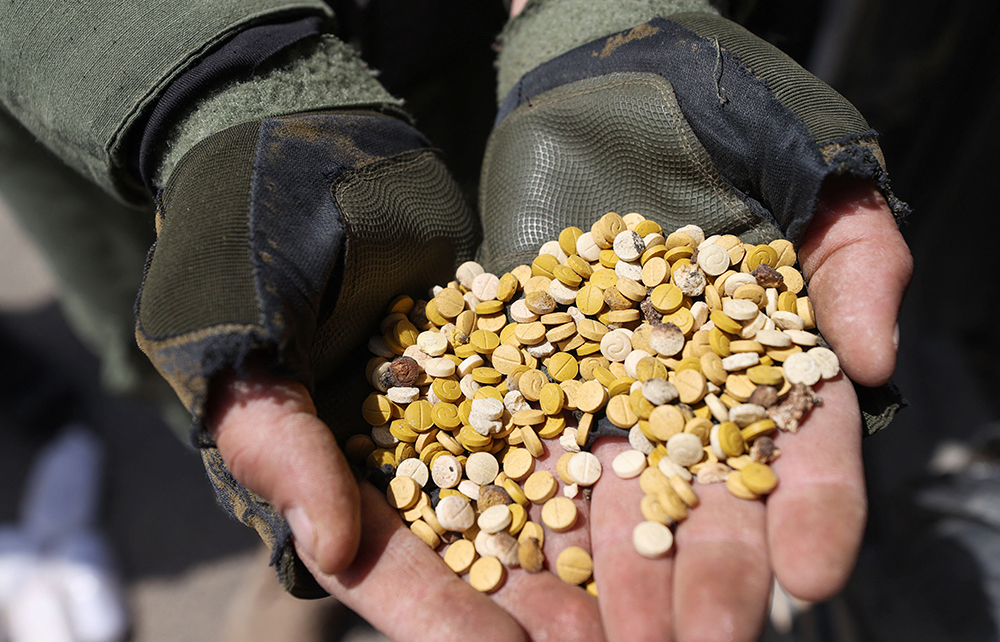 Abu Hassan puts down his Kalashnikov and reaches into a pocket of his vest to hand me a small white pill. “Here,” he says in Arabic, “a gift. It will keep you up for 48 hours.’ He grins and adds, in English, “Good sex!” The pill is Captagon, an amphetamine known as “the poor man’s Coke.” It can make the user feel invincible and has been taken by fighters on all sides in the Syrian civil war; Isis are said to have been big fans of Captain Courage. It has since spread to the Middle East. You might find Captagon fueling a party in Riyadh or keeping a cab driver awake during a double shift in Baghdad. It is of course illegal. And terribly addicting. It is said to be by far Syria’s largest export, accounting for more than 90 percent of the country’s foreign exchange. The Assad regime is perhaps the largest drug state in the world.

Abu Hassan was introduced to me as the boss of a Lebanese Captagon gang. We met through a relative of his – the only reason Abu Hassan talks to me. He’s not the biggest Captagon producer in Lebanon, he says, but he’s not the smallest either. He’s not what you would imagine a Lebanese drug lord to be – no jewelry, no flashy car. He’s short and scruffy, in his fifties, with gray stubble and a weather-beaten chestnut-colored face; He drives an old Mercedes. As expected, there are four or five bodyguards. One, wearing a combat webbing filled with ammunition and grenades, sits with us as we converse. In the distance are the mountains on the border with Syria. Abu Hassan explains how the Assad regime makes money from him.

It starts with a call from a middleman in Syria placing an order for a dealer in Iraq, Jordan or Saudi Arabia. Then they rush to get the ingredients, which he calls “Chinese salts” and benzene. These are legal chemicals that ship through the Beirut port and cost little. His men mix them in a vat and press out the pills with a machine. Before it was banned, Captagon was a drug for narcolepsy and attention deficit disorder. The body breaks it down into amphetamine and another stimulant found in small amounts in tea. Much of what is sold as Captagon in the Middle East is simply amphetamine. Abu Hassan does not know the chemical formula for what he is making. But he proudly says that every five-pound batch of methamphetamine or crystal meth (a drug that causes teeth and hair to fall out) gets an extra kick. They put eight pounds in the stack for the pill he gave me, “so it’s good stuff.”

The smallest order he ever received through the Syrian middleman was three boxes, the largest being 300. Holding his hands apart to show something the size of a large shoe box, he says each would contain around 10,000 pills. He sells the pills for $1-2 a piece, but then has to pay for the “road” through Syria. It costs $2 a pill to get a shipment across the border, then another $2 to go a little way up the road into the city of Homs, and so on through all the regime’s checkpoints. The pills could pass through “a dozen hands” on their way to distributors and their customers in the Middle East, with the price rising at each stage. In Riyadh, each pill costs $24 or more. A box that sells for $20,000 ends up being worth a quarter of a million.

Much of that money, he says, goes to Syria’s mukhabarat, or secret police; ‘the intelligence’; and the army’s 4th Division, led by President Assad’s brother Maher. There is also a big businessman who controls several checkpoints because he is used by the regime to monitor aid convoys. “Everyone gets their share.” Even the smallest shipment means half a million dollars for the people running the Syrian regime; A hundred boxes puts $10 million in their hands. “And let’s say a hundred people like me are transporting goods across Syria. That’s the whole state budget, right there.’

That’s how it works in Lebanon. He says he has to pay the local police, the Mukhabarat, the intelligence services and Hezbollah, the Iran-controlled Shia militia that has been fighting for the Syrian regime. We meet on Hezbollah territory in the Bekaa Valley. The towns along the highway through the Beqaa are littered with Hezbollah flags, a fist holding a Kalashnikov on a yellow background. Posters of clerics and those killed in action in Syria are pinned to lampposts. The leader of the organization, Hassan Nasrallah, has called the claim that they are smuggling drugs “fake news”. It’s against Islam, he says, and they don’t even sell drugs to their enemies. Abu Hassan smiles at that. He knows that Hezbollah doesn’t have to be in the Captagon business to benefit.

The Assad regime’s involvement in Captagon is much, much bigger than just blackmailing smugglers like Abu Hassan. Like him, the US government identifies Maher al-Assad as a “kingpin” – but behind both manufacturing and smuggling. I was told about a meeting in Washington DC where an official presented the intelligence information. There were Captagon factories everywhere: two in the province of Homs and one in Hama, in the heart of the country, and several in Tartous and Latakia along the coast. A paper factory in the northern city of Aleppo had also been converted to Captagon production. This last assertion comes as no surprise. Two years ago, the Italian police confiscated three container ships from Syria in the port of Salerno. They found almost 15 tons of Captagon hidden in large paper cylinders. Street value was over a billion dollars, making it the largest amphetamine bust in history.

Charles Lister of the Middle East Institute in Washington DC says there is no doubt that Captagon is manufactured “on an industrial scale” in Syria. The numbers are amazing. Last year, $5.5 billion to $6 billion worth of Syrian Captagon were seized abroad. The total value of legal exports from Syria is $800 million. But according to Lister, the Captagon trade is at least five times what is seized, if not 10 to 20 times greater, given how easy it is to smuggle across borders in the Middle East. So his most conservative estimate is $25-$30 billion worth of exports. For comparison, the total value of drugs exported to the United States by the Mexican cartels is estimated to be between $5 billion and $7.5 billion a year. Lister says: “Right now there is only one source of income that is important to the regime. And these are drugs.”

There are no qualms about the human cost. This is a regime that has murdered tens of thousands of its own people to stay in power. These crimes have exposed Syria to stifling international sanctions, which one observer told me punish ordinary people for not overthrowing their government. Some therefore advocate more targeted measures. But the likes of Maher al-Assad are already under sanctions and, the real problem, the more isolated the Syrian regime becomes, the more it will have to rely on its illegal revenue stream, Captagon.

Others argue to bring Syria back into the international community and bribe the regime to go straight. But that would deprive the Assads and their allies of justice. And that’s easy money for the regime. The drugs are cheap to produce and the market continues to grow, especially now that it is penetrating Europe. As Lister says, it would be “crazy” from her point of view to get out of the Captagon business.

Sign up today and get your first month free

Without obligations. Cancellable at any time.

He wanted to “encourage the region itself to come together to fight it.” Saudi Arabia has shown what that could look like. The Saudis banned imports of all Lebanese fruits and vegetables after eight million Captagon pills were found in a shipment of hollowed pomegranates. This hit all Lebanese farmers unfairly, but it is having an effect. Abu Hassan tells me that he had to close his pill press because of the threat of government raids. As we speak, he and his bodyguards look nervously at the street. “We pay for protection, but that doesn’t mean we can sleep comfortably.”

Abu Hassan tells me the story of his life: He joined a Palestinian militia to fight the Israelis, then the Shia Amal militia to fight in the civil war, and then switched to hash farming, now Captagon. Five years ago, his nephew was among a group of Lebanese soldiers kidnapped and killed by Isis in the nearby Sunni city of Arsal. So Abu Hassan kidnapped the nephew of the man he believed responsible. He left the young man on the grave of his dead relative and shot him. Then he called the man in Arsal and said, ‘Come and get your dog’s body.’ War produces men like Abu Hassan. The war in Syria has produced many of them – the Captagon trade will not be easy to eradicate.