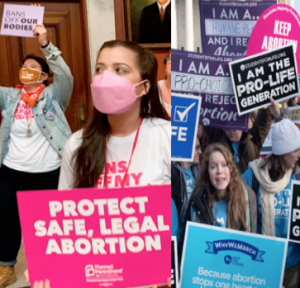 A federal judge issued an interim order to stop Kentucky’s new abortion law, paving the way for the state’s two providers to resume offering abortions after a week of inaction.

“The court is currently withholding enforcement of all of HB 3 because it lacks information to specifically determine which individual provisions and subsections may be complied with,” Jennings wrote in a 21-page judgment. Planned Parenthood’s request for an injunction is granted.

It has been eight days since Planned Parenthood and the EMW Women’s Surgical Center filed a federal court petition for emergency relief from House Bill 3, a sweeping abortion law they said had so many restrictions it was impossible to comply.

The law went into effect April 13 when the General Assembly overrode a veto by Gov. Andy Beshear, who said in his veto message that the law was “probably unconstitutional.” He was also against it because there was no exception for rape or incest.

HB 3 establishes new restrictions on abortions for girls under 18, including those seeking a judge’s permission in certain circumstances, and requires fetal remains to be disposed of through cremation or burial.
Abortion advocates said the passage of HB 3 would place an unconstitutional, undue burden on women who desire an abortion. In a response filed in Western District Court on Tuesday, Attorney General Daniel Cameron disagreed.

“Planned Parenthood’s alleged concerns that have led to this lawsuit are based on a misinterpretation of the legal requirements,” wrote Cameron, who is listed as a defendant in his official capacity as a defender of Kentucky law.

Cameron argued that the burden of developing the forms required by HB 3 falls on the Cabinet for Health and Family Services, not abortion providers – allowing them to keep working until the forms are made available.

Jennings’ order did not address the larger issue of the new law’s constitutionality. Instead, it focused on the clinics’ claims that they could not comply with the measure because the state had not yet established clear guidelines.

The judge said she decided to block the entire law because she lacked information “to determine specifically which individual provisions and subsections can be complied with.”

“The plain text of HB 3 is clear that the entire Act became effective and enforceable on April 13, 2022. . . including the enforcement and penal provisions,” she wrote, adding that it was “unreasonable for[abortion providers]to assume that HB 3 does not mean what it says.”

While Planned Parenthood CEO Rebecca Gibron called the ruling “a victory,” she said it was “just the first step.”

“We are grateful for the injunction preventing this egregious abortion ban from continuing to block a constitutionally protected right to basic services,” she said in a statement. “We stand ready to fight in court for our patients’ right to basic health care and continue to do everything we can to ensure access to abortion in Kentucky is permanent.”

“We are disappointed that the court has decided to temporarily halt enforcement of the entire law,” Cameron said. “This law is constitutional and we look forward to continuing to defend it.”

“We are disappointed by the judge’s decision as the law provided for a stay of ending the life of unborn children in the Commonwealth,” Gray said. “Kentucky Baptists will continue to minister to women who feel trapped by unplanned pregnancies as we also work and pray for the day when legalized abortion will be part of our past.”

David Walls, executive director of the Family Foundation, said the ruling puts “politics above the law.

“By refusing to comply with HB 3’s reasonable safeguards and immediately going to court, pro-lifers have shown once again that they don’t really care about women and just want to continue profiting from the slaughter of babies in the womb,” he said. “I am grateful that Kentucky Attorney General Daniel Cameron will continue to vigorously defend HB 3’s pro-life protections as this case progresses.”

“Kentuckians and all Americans look earnestly to a very near time when states can protect their most vulnerable citizens, premature babies in utero, without interference from activist courts.”

“Today a federal judge granted a temporary stay of enforcement of House Bill 3, an unconstitutional law passed by the General Assembly that effectively ended abortion services in Kentucky, even for victims of rape and incest,” said Morgan McGarvey, Democrat leader in the Senate. “I’m glad the judiciary stopped the passage of this bill and did not automatically allow the Kentucky legislature to revoke a woman’s constitutional right to reproductive choice.”

Addia Wuchner, executive director of Kentucky Right to Life, added that her organization is consulting with counsel and Cameron to determine the next steps to appeal the injunction.

“From the beginning, we recognized that House Bill 3 would not end abortion in Kentucky,” Wuchner said. “HB 3 is a multifaceted bill that reflects our ongoing commitment to Kentucky’s most vulnerable citizen, the unborn child, and advocating for justice and safe medical practices for their mothers.”

The preliminary injunction of HB 3 came into force on Thursday at 3 p.m. and is valid for 14 days, subject to an application for an extension or other legal provisions.

Loans for graduates. Most graduating students are heavily loan-driven