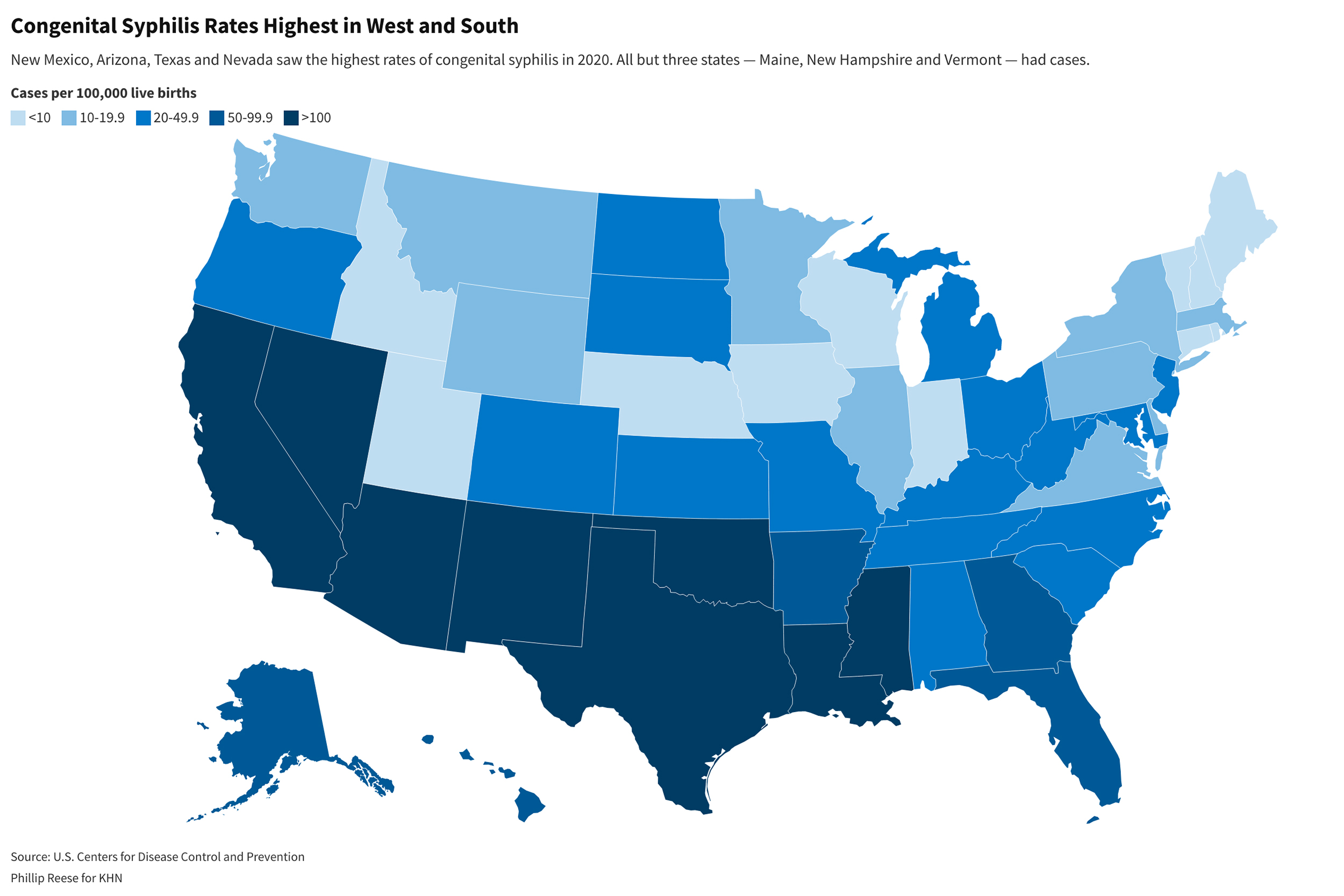 For the past decade, the number of babies born with syphilis in the United States has been steadily increasing. Data released Tuesday by the Centers for Disease Control and Prevention shows just how bad the outbreak has gotten.

In 2012, 332 babies were born infected with the disease. By 2021, that number had increased almost sevenfold to at least 2,268, according to preliminary estimates. And 166 of those babies died.

About 7% of babies diagnosed with syphilis in recent years have died; Thousands of others born with the disease have had problems, including brain and bone deformities, blindness, and organ damage.

For public health officials, the situation is all the more heartbreaking considering that from 2000 to 2012, congenital syphilis rates hit near historic modern lows amid ambitious prevention and education efforts. By 2020, the nationwide case rate was more than seven times that of 2012, following a severe erosion of funding and attention.

“The really depressing thing is that we had this thing practically eradicated in 2000,” said William Andrews, a public information officer for the Oklahoma Sexual Health and Harm Reduction Service. “Now it’s back with a vengeance. We’re really trying to get the message across that sexual health is health. It’s nothing to be ashamed of.”

Despite rising case numbers, the CDC’s sexually transmitted disease prevention budget — the main source of funding for most public health departments — has been largely stagnant for two decades, its purchasing power dragged down even further by inflation.

Tuesday is CDC report on STD trends provides official data on congenital syphilis cases for 2020 as well as preliminary case numbers for 2021 which are expected to increase. CDC data show that rates of congenital syphilis continued to rise in 2020 in already overwhelmed states like Texas, California and Nevada, and that the disease is now occurring in almost every state in the nation. All but three states — Maine, New Hampshire, and Vermont — reported cases of congenital syphilis in 2020.

From 2011 to 2020, congenital syphilis resulted in 633 documented stillbirths and infant deaths, according to the new CDC data.

Prevention of congenital syphilis – this is how syphilis is used when syphilis is transmitted to a fetus in the womb – is extremely simple from a medical point of view: if a pregnant woman is diagnosed at least a month before childbirth, just a few shots of penicillin will have an almost perfect effect Cure rate for mother and child. But funding cuts and competing priorities in the country’s fragmented public health system have severely limited access to such services.

The reasons pregnant people with syphilis go undiagnosed or untreated vary geographically, based on data collected from states and analyzed by the CDC.

In western states, the largest proportion of cases involve women who have had little to no prenatal care and are not tested for syphilis until delivery. Many have substance use disorders, mostly related to methamphetamines. “They felt a lot of prejudice and stigma from the medical community,” said Dr. Stephanie Pierce, a maternal fetal medicine specialist at the University of Oklahoma, who directs a clinic for women at risk of pregnancies.

In southern states, a CDC study of 2018 data found that the largest proportion of congenital syphilis cases occurred in women who had been tested and diagnosed but had not received treatment. That year, 37% of black mothers who gave birth to babies with syphilis were not treated appropriately despite receiving a timely diagnosis. For white mothers, it was 24%. Longstanding racism in medical care, poverty, transportation problems, underfunded public health departments, and overcrowded clinics whose staff are too overworked to care for patients all contribute to the problem, according to infectious disease experts.

Doctors are also noticing an increasing number of women being treated for syphilis but becoming reinfected during pregnancy. Amid rising cases and stagnant resources, some states have focused disease screening on pregnant women of childbearing age; You can no longer prioritize treating sexual partners who are also infected.

dr Eric McGrath, a pediatric infectious disease specialist at Wayne State University School of Medicine in Detroit, said that in recent years he has seen several newborns whose mothers have been treated for syphilis, but then during pregnancy by partners who have had it not done, re-exposed, treated.

Treating a newborn baby for syphilis is not trivial. Penicillin poses little risk, but giving it to a baby often involves a spinal tap and other painful procedures. And treatment usually means leaving the baby in the hospital for 10 days, interrupting an important time in family bonding.

McGrath has seen a few babies in his career who were undiagnosed or treated at birth who later came to him with full-blown syphilis complications, including full-body rashes and inflamed livers. It was a horrible experience that he doesn’t want to repeat. The preferred way, he said, is to spare the baby the ordeal and treat the parents early in the pregnancy.

But in some places, providers don’t routinely test for syphilis. although mandate most states Testing at any point during pregnancy, last year only 14 people in their third trimester needed it. The CDC recommends third-trimester testing in areas with high rates of syphilis, a growing proportion of the United States

After Arizona declared a statewide outbreak in 2018, state health officials wanted to know if widespread third-trimester testing could have prevented infections. Looking at 18 months of data, analysts noted that nearly three-quarters of the more than 200 pregnant women diagnosed with syphilis in 2017 and the first half of 2018 received treatment. That left 57 babies born with syphilis, nine of whom died. Analysts estimated a third of infections could have been prevented with third-trimester testing.

They also noted that screening women through public programs would cost the state around $113,300 and that treating those women would cost an additional $113. After accounting for hospital costs for infected infants, officials concluded the additional testing would save the state money.

And yet it was difficult to get money for prevention. Adjusting for inflation, CDC prevention funding for STDs has fallen 41% since 2003, according to an analysis by the National Coalition of STD Directors. And this despite the fact that the number of cases has increased and the health authorities are burdened with more work and far less money.

Janine Waters, STD program manager for the state of New Mexico, observed the breakup. When Waters began her career more than 20 years ago, she and her colleagues were following up on every reported case of chlamydia, gonorrhea and syphilis, not only making sure people were treated but also reaching out to their sexual partners to support the goal reach to stop the spread of infection. In a 2019 interview with KHN, she said her team struggled to keep up with syphilis alone, despite registering dreaded congenital syphilis cases in neighboring Texas and Arizona.

As of 2020, New Mexico had the highest rate of congenital syphilis in the country.

The Covid-19 pandemic has exhausted the remaining resources. Half of the health departments across the country halted STD fieldwork altogether and redirected their resources to Covid. In California, which has struggled with high rates of congenital syphilis for years, three-quarters of local health departments dispatched more than the half of their STD staff to work on Covid.

As the pandemic subsides, at least in the short term, many public health departments are turning their attention back to syphilis and other diseases. And they do it with reinforcements. Although those of the Biden administration proposed STD prevention budget for 2023 remains unchanged, American Rescue Plan Act earmarks $200 million to help public health officials improve contact tracing and surveillance for Covid and other infectious diseases. Many departments are diverting that money towards STDs.

The money is an infusion that state health officials say will make a difference. But when you factor in inflation, it essentially returns STD prevention funding to where it was in 2003, said Stephanie Arnold Pang of the National Coalition of STD Directors. And America’s bailout plan money doesn’t cover some aspects of STD prevention, including clinical services.

The coalition wants to revitalize dedicated STD clinics where people can come in for tests and treatment at little or no cost. Proponents say it would fill a void that has plagued treatment efforts since public clinics en masse closed in the wake of the 2008 recession.

Texas, battling its own pervasive outbreak, will use its share of American Rescue Plan money to fill 94 new positions focused on various aspects of STD prevention. Those settings will support a range of measures the state put in place before the pandemic, including an updated data system to track infections, review panels in major cities investigating what went wrong in each case of congenital syphilis, and a requirement to providers test for syphilis in the third trimester of pregnancy. The array of interventions appears to be working, but it could take a while for cases to go down, said Amy Carter, the state’s congenital syphilis coordinator.

“The growth didn’t come overnight,” Carter said. “Therefore, our prevention efforts will not have a direct effect overnight either.”

KHN (Kaiser Health News) is a national newsroom that produces in-depth journalism on health issues. Along with Policy Analysis and Polling, KHN is one of the three major operational programs at KFF (Kaiser Family Foundation). KFF is a donated non-profit organization that provides information on health issues to the nation.

This story can be republished for free (details).