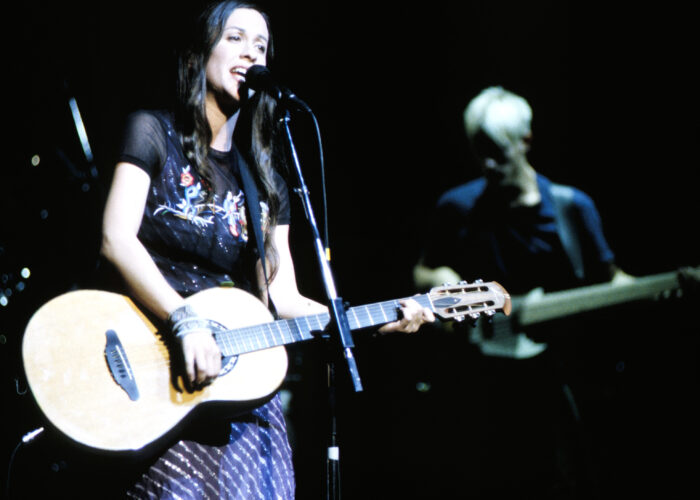 In 1995, a virtually unknown Canadian singer named Alanis Morissette released her second studio album, Jagged Little Pill. What followed was one of the most impressive and rapid rises to superstardom in rock ‘n’ roll history.

“Jagged Little Pill” gained worldwide acclaim, hitting many Billboard charts and generating hit singles like “You Oughta Know”, “Hand in My Pocket” and “Ironic”. It earned Morissette her first pair of Grammys for Album of the Year and Best Rock Album in 1996, and eventually became one of the best-selling albums of all time.

Two decades later, the album was adapted into a Broadway musical of the same name that ran in New York City until COVID-19 forced its closure in 2021. The musical and accompanying book by Diablo Cody addresses several of the album’s key themes, including pain, empowerment and healing, but in ways fans have never experienced before.

In the middle of the San Francisco station “Zicky Little Pill” At the Golden Gate Theater, the singer spoke to The Chronicle from her Bay Area home via Zoom about what it took to transform an iconic album into an award-winning Broadway musical and more.

This interview has been edited for length and clarity.

Q: You came and watched the BroadwaySF stop of Jagged Little Pill a few times during opening week. What did you think?

A: I loved it. This whole cast and crew, it’s a new chapter, for lack of a better term. There’s a lot of vitality and a lot of them cut their teeth off for what sounds like their first time in terms of touring. I just think that anyone who can do that many gigs a week and travel is a natural warrior. I just look at them and I just think, wow. I sometimes think I’m a warrior when I’m on tour, but that’s a whole other level.

Q: When Jagged Little Pill came out in 1995, did you ever imagine that it would inspire a musical almost 30 years later?

A: No! I often tell people that when I initially write my songs, they are for myself, no different than a journal entry. If I then share them, they no longer belong to me. People can interpret them however they want. It becomes sort of a macro in a way. And I love hearing people’s interpretations of the songs because 99% of the time it has nothing to do with my personal experience in a way that might be obvious. It’s just taken over by them and marks a certain time, so I live for that.

Q: How did it become a Broadway musical?

A: About 11 years ago I was sitting with Vivek Tiwary, one of the producers, and he said to me, ‘Do you want to turn ‘Jagged Little Pill’ into a musical?’ and I said, ‘No, not if it’s a jukebox musical is. I wouldn’t really be able to figure it out.”

So I said let’s take our time and see if there’s a consensus – it’s taken us many years. I’ve been privileged to meet so many incredible writers who were masterful but for some reason (they were) didn’t click. And then when I was given the names of Diane Paulus and Diablo Cody and met with them, I was like, ‘Wow, OK, these are women, we’re all finishing each other’s sentences and we’re on the same wavelength. ” So off to the races!

Q: How involved were you in the process of creating the musical and taking it from an album to something that hits the theater stage?

A: As with anyone who co-authors or writes fiction, much of this story is not autobiographical, but there’s no way our personal experiences don’t surface, whether it’s Diablo Cody or I or any of us writing. It’s hard not to beautifully translate our personal experience into story, fiction or otherwise, so it’s personal in that sense, and anyone who knows me well can pick that up by watching it.

But Diablo Cody… I have to say, it’s such an achievement what she’s achieved, for working with a record – a pre-existing record – that really has its own narrative and ethos – for her, a story in a way to integrate that doesn’t seem so connected and cohesive to me is just stunning to me. Every time I see her I just remind her what a genius she is.

Q: It’s wonderful to see a bunch of powerful, talented women working together to create something beautiful.

A: Yes, you sure can’t swing your dirty socks in this Broadway musical without meeting a master. But then the whole story was just one of one plus one equals 90.

Q: Turning Jagged Little Pill into a musical is an opportunity to dig a little deeper into the album’s themes. Has that made you appreciate the words you wrote all those years ago more? Or do you hear your lyrics differently now?

A: Actually, because I was in the audience or in the workshop… it was the first time I received my own songs and I was blown away.

How do you say that without sounding like an egomaniac? (Laughs.)

I was really moved because I got my first taste of objectivity in a way that, as you can imagine, is hard to achieve when you’ve been monologizing around the planet on stage for so many years. It was really nice to get it, and then even more special to get it through gender bending (methods) – basically the songs were often gendered to fit into the history of the family, the Healys. So when I hear Steve’s character sing “Mary Jane” or hear Nick’s character sing “Perfect,” there’s something about that vulnerability in a male body that just keeps making me cry.

Q: The musical was already a huge hit, being nominated for 15 Tony Awards and touring across the country. What does it mean to you to be able to introduce your old music to a new generation and in a new way?

A: What I love most about it is that the essence of what I share is that it’s safe to be human and have all feelings. I think empaths and highly sensitive people don’t shy away from emotions, whether it’s anger, frustration, anger, joy, peace, pain, sadness – all of it. I think it’s an invitation to feel whatever you want to feel in the context of what’s being expressed through this musical, because there are many themes.

At one point, early on, people said to me, “Are you afraid of how many issues you’re addressing in this story?” and I said no. Not really, because I can hold that complexity and refuse to underestimate the audience. You can hold it too.

Q: “You live and learn” is a key message of the album and the song it comes from closes the musical. After more than three decades in the music industry, what are the most important lessons you have learned along the way?

A: God, I’d have to do a whole War and Peace over everything I’ve learned over the past few decades. (Laughs.)

I would say for me as often as possible in today’s world’s cluttered lifestyle it becomes just time alone to regroup and process and then time with a safe other (loved one) just to move it. I actually shared this with the whole team when I saw her a few days ago. Just lean on each other.

It’s an interesting chapter to live on this planet.

Q: Like many other shows across the country, the 25th anniversary tour for Jagged Little Pill and the musical has been postponed due to COVID. What was it like navigating a global pandemic and having to reschedule appointments and all that?

A: I got into this really intense gear because I just wanted to show up for people. I suffered from postpartum depression myself, so I suffered, and I just felt very connected to everyone around me who was riddled with fear or mortal fear or whatever we were all talking about at the same time. But I just really wanted to show up, usually online. I have actually been working harder than I have in a long time because I wanted to compensate for not being out there and just wanted to let people know that they are not alone and that this is a vulnerable planetary time and that it is okay feel all these feelings

So, usually through music and interviews, and just showing the humanity of what it was like to be inside lockdown was powerful. We did a music video featuring the cast of the Broadway musical for a song called “Smiling”. That’s right when COVID hit and we were all locked up and they all thank god they weren’t locked up in New York and I was just like, ‘Let’s make a music video’ where we all lose our s – in our apartments or our homes or wherever we are. It was a really great idea because it just allowed us to stay connected at a time when we were feeling super isolated like everyone else.

Q: After ticking another achievement off your list with this musical, what’s next in your career?

A: There are so many tentacles calling out to me and I’m having meetings right now about which ones to prioritize because I’m drawn to all forms of expression, whether it’s photography or music, comedy or acting, design or architecture. There are so many ways to express yourself and they all make me dizzy.

But I have a few things in my back pocket. I have a new record. I have a website that is very focused on mental wellbeing and mental wholeness. I actually believe a little more in wholeness than in wellness because sometimes wellness is that kind of perfectionist standard while the invitation to wholeness is dark and light and everything in between.

I work a lot with activism, music and articles and probably revitalizing my podcast which I touched on very briefly for a few years. There’s also a one-person piece that I’ve been working on for a while and I’d like to articulate that at some point in the next few years.

What is period flu? Symptoms, Causes and Treatment – Forbes Health