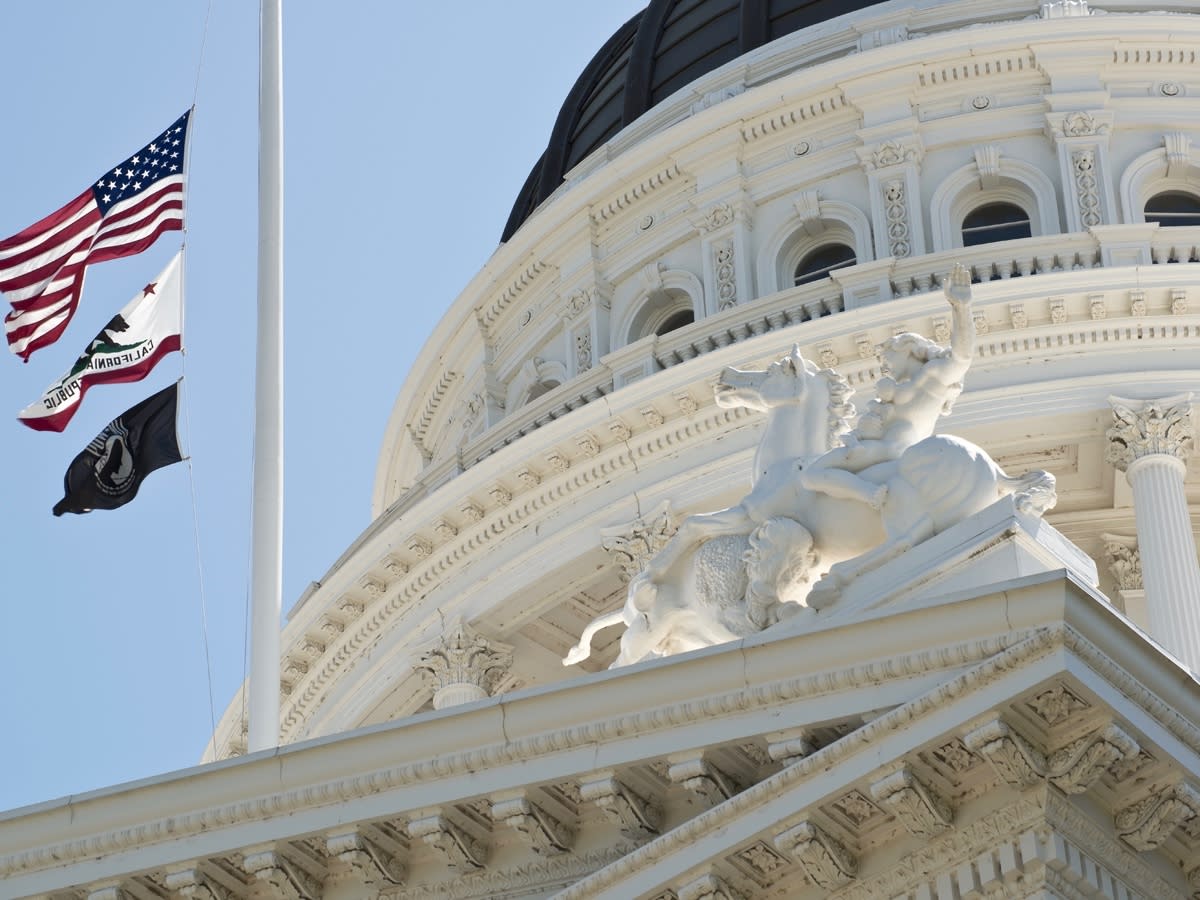 5 CA bills you should know about

CALIFORNIA — A new crop of bills is rolling through the California Legislature dealing with everything from vaccination to insurgency to equal pay. Here are five legislative proposals on sensitive issues.

1. Children over the age of 12 can be vaccinated without the consent of their parents or guardians.

Senate Bill 866, introduced by Senator Scott Wiener (D-San Francisco), is one of a series of controversial bills being drafted by the Vaccine Work Group, a group of lawmakers tasked with increasing immunization rates and fighting COVID-19 19 misinformation is commissioned.

SB 866, also known as the Teens Choose Vaccines Act, allows minors as young as 12 to receive FDA-approved vaccines — against COVID-19 or any other virus — without the consent or even knowledge of their parents or guardians. Wiener said his bill builds on existing state laws that allow minors as young as 12 to consent to HPV vaccines, birth control, abortion and the diagnosis/treatment of a range of infections and medical conditions.

“Even if a teenager desperately wants a vaccine — and even if not vaccinating prevents a teenager from participating in sports and music activities or meeting friends — parents can simply refuse to vaccinate the teenager,” reads a press release from Wiener’s office. Several states, including South Carolina and Alabama, allow minors to be vaccinated without the consent of a parent or guardian, although ages vary.

A number of Republican lawmakers have expressed concerns about the bill. MP Randy Voepel (R-Idyllwild) told the City News Service he felt there should be an “informed decision” about whether or not a person should be vaccinated, “and certainly shouldn’t be opened up to minors who are not considered old enough.” apply to driving, or vote in many cases.” Senator Rosilicie Ochoa Bogh (R-Beaumont) told CNS the bill was “an attempt to break up the family unit.”

On March 9, SB866 was referred to the California Senate Judiciary Committee a second time. Another bill mandating COVID-19 vaccinations for California schoolchildren has been shelved.

2. Anyone who lacks supportive housing and mental health services could be entitled to it.

Senate Bill 1446, introduced by Senator Henry Stern (D-Calabasas), is one of several pending bills aimed at expanding mental health services, particularly for homeless people. SB 1446 would guarantee mental health services, including inpatient and outpatient care, and “needs-based” support services (such as access to treatment beds, social workers, mental health residential programs, etc.) for those who lack them or “would not otherwise live safely”. in the community.”

According to the bill, California currently suffers from a shortage of psychiatric beds and psychiatric living facilities, and the need for both is expected to increase in the coming years. The law provides that anyone who needs it will receive “healing homes”: a mental health residential program that results in long-term supportive living for people with severe and ongoing mental illness and offers a variety of therapeutic services and resources.

Lawmakers are at odds over whether to force people with mental illnesses to seek treatment if they refuse. Bills by Sen. Brian Jones (R-Santee) and Assemblyman James Gallagher (R-Yuba City) would reduce barriers to placing people under guardianship by expanding the definition of “severely disabled people.”

A proposal by Gov. Gavin Newsom would create “CARE Courts” that would connect anyone struggling with untreated mental illness to a court-ordered CARE plan for up to 24 months. Family, first responders, visiting workers, and others could initiate civil rather than criminal proceedings. Those who do not make progress in the program may later be referred to a conservatory.

SB 1446 was again referred to the Senate Committee on Health.

3. In order to reduce wage differentials, employers would have to make their wage data more detailed and transparent.

Senate Bill 1162, introduced by Sen. Monique Limón (D-Goleta), would require employers to include salary ranges in job postings and offer workers all opportunities for salary increases. Employers would also be required to keep records of each job posting and wage rate history for each worker, which would be available for inspection by the Labor Commissioner. At present, employers are only required to submit tariffs upon “reasonable request”.

SB 1162 would also require employers with 100 or more employees to submit expanded payroll data reports to the Department of Fair Employment and Housing that include: average and median hourly rates for combinations of race, ethnicity and sex within multiple designated job categories. Employers would also be required to report the number of employees, categorized by race, ethnicity, and gender, whose annual earnings fall into each of the pay grades used by the U.S. Bureau of Labor Statistics’ employment statistics survey, and the total number of hours worked by each employee worked plus paid time off.

Third-party employees would also have to submit the same information.

While employers are already required to report much of this information, the new law would make the information public and append the company’s name to the data. The bill is intended in part to address the wide-ranging wage disparity in California. The San Francisco Chronicle found that the annual gender pay gap in California was $46 billion, while the racial/ethnic pay gap was $61 billion.

The bill would allow courts to fine any employer who fails to submit all required documentation, ranging from $100 to $200 per worker.

SB 1162 was co-sponsored by the California Employment Lawyers Association and the National Employment Law Project and endorsed by a number of employment law organizations, according to the San Francisco Chronicle. However, the California Chamber of Commerce included the bill on its 2022 “Job Killers” list, stating that the bill “encourages litigation against employers for the release of extensive, unreliable data” and “imposes impossible administrative and record-keeping requirements.” to implement.”

The bill has been brought before several Senate committees and is scheduled to go back to trial on Tuesday.

4. California could present voters with an amendment taxing extreme wealth.

California has the most billionaires of any US state and the third highest of any state or country. Assemblyman Alex Lee (D-San Jose) wants to make sure they pay. Assembly Bill 2289 would impose a 1.5% annual tax rate on California residents with net worth over $1 billion starting January 1, 2023. Beginning January 1, 2025, it would impose a 1% tax on net worth of $50 million or more. The tax would be taxed on the entire wealth of the person. A joint study by UC Berkeley and UC Davis estimates that the new tax would raise $22.3 billion annually. Similar bills were introduced in California and failed repeatedly, although Lee claimed in a press release that a poll shows 70% nationwide support for a $30 million or more wealth tax on Californians.

That’s what it would take: Because AB 2289 exceeds the state tax limit, it would have to be presented to voters as a constitutional amendment. Lee introduced a bill last year that didn’t make it to committee.

The proposed tax would also seek to circumvent loopholes by taxing all wealth, regardless of whether it was recognized as income. That would try to prevent the ultra-rich from dodging income and capital gains taxes by not selling their shares.

The law would affect about 15,000 Californians. According to Lee’s office, the collective wealth of Californians rose by more than $200 billion during the pandemic.

The bill was referred to the Assembly’s Judiciary Committee and the Revenue and Taxation Committee.

5. Nonprofits supporting an “insurgency” would lose their tax-exempt status.

Senate Bill 834, introduced by Scott Wiener (D-San Francisco), is the nation’s first bill introduced in response to the Jan. 6, 2021 attack on the US Capitol. It would authorize the attorney general to determine that an exempt organization “took active part in, or instigated active involvement in, actors or conspiracies that are defined as criminal under certain federal statutes.” The US Supreme Court, in a case against Bob Jones University, ruled that the purpose of charities claiming tax-exempt status “must not be illegal or contrary to public policy.”

The attorney general would be required to notify the franchise tax authority, which would then revoke its tax-exempt status.

“Tax-exempt status is a privilege, not a right, and organizations that participate in or instigate riots or conspiracies to commit riots — both of which are illegal — should not be given this special status to help them fundraise,” reads a statement by Sen Wiener. “Furthermore, non-California non-profit organizations should not be able to register to raise money in California by participating in or inciting riots.”

Some nonprofits have raised alarms, fearing the law could lead to suppression of free speech and politically motivated investigations. “While CalNonprofits opposes insurrection, we have concerns about SB 834 (Vienna) in its current form,” Lucy Salcido Carter, CalNonprofits public policy director, told the Nonprofit Times in an email. “We do not want legitimate freedoms/activities of non-profit organizations to be restricted. We recognize that Senator Wiener recognizes the challenges in defining the activities covered by this bill.”

SB 834 was again referred to the Public Safety Committee.

This article originally appeared on the Across California Patch

What is a pathologist and how do you become one?